The waiter isn’t supposed to be coming off as entirely creepy here, which is what I fear he may be doing. There’s a purpose here to the way that every character is acting, and hopefully I’m able to pull it all off at the end.

I’m off this weekend to Pokagon, which is a state park in Angola, IN. My family goes here every year with friends of the family to enjoy what I call “camping with cable TV.” Sure we BBQ, sing songs by firelight, go on nature hikes and have a blast…but we stay in cabins with running water, electricity, and yes – cable TV. It’s not quite camping, but it’s not quite staying in a hotel either. 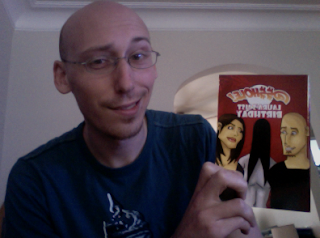 In case you didn’t know, I’ve gotten a table at Mid-Ohio Comic Con (October 3-4 in Columbus, OH) with Rival Angels creator Alan Evans. We’ll be hanging out with The Dreamer creator Lora Innes, and several other comic creators. Not sure on any speaking schedule while there, but I’m working on it. More to follow.