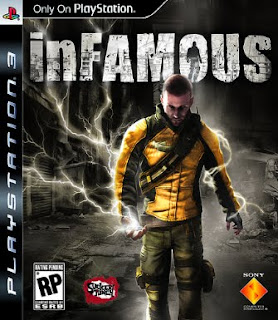 Video Game Review: InFamous
Platform: PS3
Developer: Sucker Punch!
Official Website
Plot: You play as Cole, a delivery guy in Empire City. When a package that you’re delivering (The Ray Sphere) explodes and destroys most of the city and all of the power, you begin to develop electrical powers. Your girlfriend leaves your side, and your best friend Zeke wants to capitalize on your newfound abilities. Meanwhile, the city is under quarantine by the United States government because a plague has broken out among the populace. Able to chose your path (redemption or revenge), you go on various missions around the city either liberating or conquering all in an effort to find the criminal mastermind behind it all, the mysterious figure known only as Kessler. 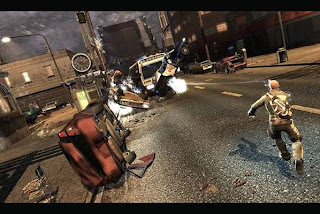 The gameplay is free-form, not unlike a Grand Theft Auto (only instead of driving cars, you can climb buildings and ride along electrical wires and train rails), with an upgrade system similar to most modern action games. As you progress through the game, you unlock new abilities that will help you reach new areas or defeat new enemies. You gain experience points by completing missions (good, evil, or neutral) and savings / killing enemies or citizens.

There’s a moral barometer (called “Karma”) in the game that allows you to be the hero or the villain. Unfortunately this mechanic isn’t very sophisticated like you would expect to find in an RPG game, usually something similar and more blatant. You’re usually faced with a moral dilemma (“Do I save this guy, or do I kill him and take his stuff) which usually results in the same outcome either way. There are some powers and trophies for Karma Good or Karma Evil, so there’s some replay value in there to try the game again playing the polar opposite.

Exploring the city is fun, especially since you can’t take any damage from falling. You can climb to the highest point in the town and just jump straight down (or you will later unlock a glide ability). Going through the city and liberating or conquering the various sections from the gangs that have taken over is a great mechanics, and gives you a very realistic feeling of accomplishment when you control an island (of which there are three in the game). The landscape even changes as you make a difference.

The cutscenes are an exciting motion comic with some terrific voice acting (although I question why a delivery guy sounds like Solid Snake from Metal Gear), and you’re generally interested to know what’s going to happen next and how you fit into this vast conspiracy surrounding the Ray Sphere. With a (predictable) cliffhanger twist ending, it wouldn’t surprise me if we see a few more games with Cole coming in the near future.

The game is totally worth buying, but don’t take my word for it: there’s a free downloadable demo that allows you to explore some parts of the city, as well as undertake three missions.