I woke up to the phone ringing at around 8:30am.

“This is your breakfast wake up call,” comes a familiar voice from the other end.

“Hi Russell,” I replied. “I set the alarm for 9 this morning…wanted to sleep in.”

I got up, took a shower, and headed off to grab breakfast real quick before our 10am panel for Reading with Pictures. By this time, my voice was really starting to disappear – and my Barry White impression was just about spot-on. Josh, Russell, and I were in the early morning panel with a sparse but involved group of people. Josh told the usual stories about how he learned how to read from comics. Russell told stories about the inspiration for his story in the anthology. And I told stories about the inspiration for Albert the Alien. 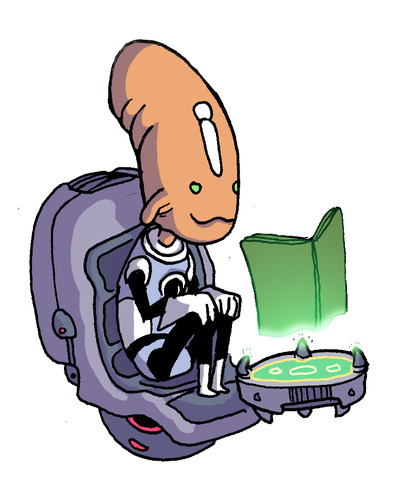 A few people from some of my earlier panels of the show were in attendance, which is always flattering. It shows that, since I was in such a variety of panels with many different topics, that people were interested in me. Things that were important to me, and that I spend my time working on. That’s a very humbling realization.

After the panel ended I headed out to the floor. It was the last day to sell, and I sold the crap out of everything I had. People from panels stopped by, people from earlier in the weekend who said they were going to buy something stopped by, complete strangers stopped by, and so did old and new friends.

I missed closing ceremonies because I wanted to sell everything I had, and I almost did. I walked the floor the last few minutes of the show to trade books with people, and then packed up my gear. The staffers invited me back to the green room for dinner with the amazing crew who made this weekend possible. After eating far too much food, I was invited to have some adult slushies with some of the convention organizers in the Presidential Suite. Man, what a room!

I didn’t take any pictures of it, but this room doubled as the green room a few years back. It’s got a kitchen, living room, office, bedroom, and a bathroom that would make rich people jealous. The shower was big enough for 5 people not touching. And I’m not exaggerating.

I left the show much later than expected, but having had the greatest weekend I’ve had in the longest time. Possibly ever.

I want to thank everyone responsible for putting that show together, and for making me a guest of the show. I can’t even begin to name them all, and trying to do so would not do it justice – because I know I would mis-spell someone’s name.

ACEN 2010 – Saturdayconventions
@$$hole!: Carl’s Birthday 20conventions, web comics
We use cookies to ensure that we give you the best experience on our website. If you continue to use this site we will assume that you are happy with it.Ok