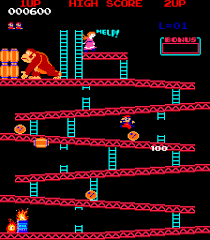 Movie Review: King of Kong Fistful of Quarters (2007)
Director: Seth Gordon
Cast: Steve Wiebe, Billy Mitchell, Walter Day
Plot: Donkey Kong, one of the most famous (and most difficult) video games of all time. This documentary is about the World Record of the highest score of the hardest arcade video game – and one man’s journey to achieve it.

In 1982 the highest score in Donkey Kong was awarded to Billy Mitchell – competitive gamer and restaurant owner – which was over 800,000 points. The second highest score was achieved in 2001, and was almost 300,000 points lower. Since that time, a foundation called Twin Galaxies has become the official record keeper of all things video game scores, and have even partnered with the Guinness Books of World Record. Billy Mitchell has become a member of Twin Galaxies and advocate for awards to be given to gamers who compete and play in public.

Steve Wiebe lost his job and needed to find purpose. He bought an arcade of Donkey Kong and started recording himself playing, in the hopes he would beat the world record. And he did. Over a million points! Upon sending the tape into Twin Galaxies, the group sent out people to take apart his machine, suspecting fraud. Ultimately they declared the score didn’t count, because it wasn’t done live.

So Steve enters a professional gaming tournement, and scores over 900,000 points. However, Billy Mitchell submits a video where he wins over a million points, and so the World Record remains with Billy. And so the drama of the movie continues to unfold.

I watched King of Kong with my buddy Josh – two comic nerds and video game lovers – who were completely enthralled in the plot of the flick. It shows what every Halo match online proves – there are douche bags who play video games. And while the audacity of the organization and the journey that Steve has to go through is compelling and incredible to watch, it’s also a little sad.

To me, video games have been a cultural experience. Something to be shared with friends, enjoyed by yourself, and something that challenges you to get to the next level. It develops eye hand coordination, and can be used as a learning tool. Let me give you an example: My little brother and I didn’t always see eye to eye while we were growing up, but when the opportunity arose to pool our money to purchase our first video game system (Super Nintendo), we jumped on it. But we had to establish a set of rules so no one hogged the system. We crafted a two-page set of rules for how we would give the other person their turn.

Plus, video games of past involved a lot of reading and puzzle solving.

But then you get the competitive jerks who aren’t satisfied by just playing a game – they have to defeat someone and be the best at it.

Don’t get me wrong, I’m not opposed to competition. I’m just opposed to douche bags. And sadly, the competitive nature of some video games has acted as a welcome mat in front of an open door for douche bags to push and shove and force their way in. Suddenly the video game party is filled with popped collars and keggers.

I exaggerate for dramatic and comedic effect, but still – this movie shows that it’s not exactly far from the truth.

Even if you don’t like video games or know anything about Donkey Kong, you totally need to watch this flick. 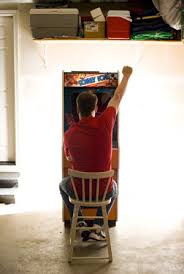 Movie Review: Toy Story 3movie review
Movie Review: GI Joe Rise of Cobramovie review
We use cookies to ensure that we give you the best experience on our website. If you continue to use this site we will assume that you are happy with it.Ok