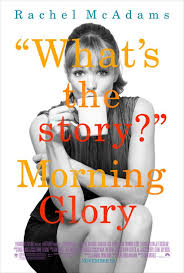 Movie Review: Morning Glory (2010)
Director: Roger Michell
Cast: Rachel McAdams, Patrick Wilson, Harrison Ford, Diane Keaton, Jeff Goldblum
Plot: Becky (McAdams) is an executive producer of a local morning TV show. When she thinks she’s going to get a promotion, the studio actually lets her go due to budget tightening. Desperate to find a new job, she moves to New York City and joins the team of the Daybreak morning show – which has crappy ratings. Shes challenged to get the ratings up or else the entire show will be canceled – replaced by gameshow reruns.

Her first duty to get the ratings up is to fire the previous male anchor and replace him with someone the studio has on retainer, but isn’t currently using: multi-award winning news anchor Mike Pomeroy (Ford). He’s an old-school reporter who has refusal rights on any story, so of course he doesn’t make Becky’s life any easier.

During all of this, Becky also tries to have a romance with fellow producer Adam Bennett (Wilson), who used to work with Pomeroy and calls him “the third worst person in the world.” Can Becky get the show’s ratings turned around AND balance a social life on top of it, all while trying to get anchor Pomeroy out of his shell? To spoil it for you, of course she can. But that’s part of the charm of romantic comedy movies – you know how they’re going to end. They’re cookie-cutter story formulas leave a popcorn trail of salt and buttery goodness throughout the simple story – and we enjoy eating every kernel of it.

McAdams is sweet, charming, and cute. While I didn’t think the romance with Wilson’s character was necessary, I guess it shows that a busy business woman who’s driven (almost controlled) by her career doesn’t have to sacrifice her personal life to be successful. Unfortunately, I went to go see this flick for Harrison Ford, and his performance falls flat. There’s some subtle emotion breaking through at the end, but he’s supposed to be this amazing multi-award winning journalist…with no emotion or enthusiasm or self esteem? I didn’t buy it.

Another issue I had with the flick (and this is a big one) is that Becky has all of these hurdles to over-come, and she does so with the greatest of ease. At no point did I really feel like she did anything to earn a victory. She needs a job…and finds one in 5 minutes after a montage. She has to turn the ratings around – so she does. The effort she puts into her job – the thought and creativity – aren’t really shown as much as the social interactions she has with her on-air talent. While this may be more entertaining than her doing more producer activities (I used to produce cable TV, if you didn’t know), it certainly doesn’t begin to show how hard she would have to work to accomplish what she’s done. I think it undercuts her efforts a bit…and certainly takes away from the audiences ability to identify with her victory.

All in all I found the movie to be charming and cute, despite its occasional sloppiness. It’s certainly worth a watch – but maybe not necessary to see in theaters.

Movie Review: The Social Networkmovie review
Movie Review: Tron Legacymovie review
We use cookies to ensure that we give you the best experience on our website. If you continue to use this site we will assume that you are happy with it.Ok