“Never doubt that a small group of thoughtful, committed citizens can change the world. Indeed, it is the only thing that ever has.” -Margaret Mead

Tuesday, January 11th is National Human Trafficking Awareness Day. In honor of the event, I teamed up with the Comic Creator’s Alliance–a group of over 100 comic book creators (both web and print!) who volunteered our artistic talents to raise money and awareness for this cause. You may not know it, but there are currently 27 million enslaved people worldwide- more than double the number of enslaved Africans during the trans-Atlantic slave trade. UNICEF estimates that 1.2 million children every year are sold into slavery, most of it sexual. The US Department of Justice estimates 16,000 victims of human trafficking are brought into the United States every year. Unlike slavery in the 19th century, what is happening today is happening in secret. It won’t end until awareness is raised, and people like you and me take a stand.

So here’s what we did: each creator contributed an original drawing of one of our own female characters, and combined them into a single image! This year’s theme was “The Brady Bunch.” There is so much going on in this image–you can look at the wallpaper for a long time and still find something new! All of the artists included in the drive are amazing and some of the fan favorites are: Scott Sava (The Dreamland Chronicles), Adam Hughes (Star Wars, Wonder Woman), Sarah Ellerton (Inverloch), Bryan Glass & Victor Santos (Mice Templar), Beau Smith (Wynonna Earp: The Yeti Wars), Billy Tucci (Shi), Mookie (Dominic Deegan), Crystal Yates (Earthsong), Lora Innes (The Dreamer), Thom Zahler (Love and Capes), and Alison Action (Bear Nuts). View the full listing of contributors here: http://comicalliance.weebly.com/the-people.html.

Donate today to download this unique, once-in-a-lifetime wallpaper. Or, this year you can buy a print! The Donations Drive will last for two weeks, from January 11th – 24th. All proceeds will be split evenly between Love 146 and Gracehaven House- two organizations working on rehabilitation of victims and prevention of this crime. 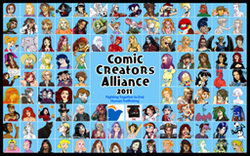 Comic Creator’s AlianceUncategorized
CCA – only one more day to donateUncategorized
We use cookies to ensure that we give you the best experience on our website. If you continue to use this site we will assume that you are happy with it.Ok