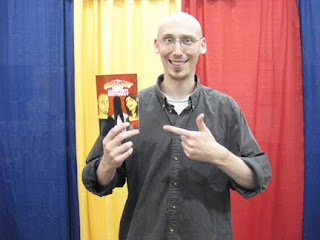 In anticipation of premiering the first @$$hole! collection, I was looking for local conventions to help promote the book and that could be a good fit with the audience. Enter Mid-Ohio Comic Con (MOCC), held at the Greater Columbus Convention Center Hall E in Columbus, Oh. I knew that I had friends in the area and some friends interested in attending the con, so I booked my table and made some arrangements and headed on down….

FRIDAY:
After work, Alan Evans (Rival Angels) picked me up in his car, and we headed off on the 6 hour drive towards Columbus. Alan and I have been friends for a few years now, having first met on Drunk Duck and eventually hanging out at a Wizard World Chicago. We eventually pulled into the driveway of two of the coolest people on the planet: Lora and Mike Innes. Lora is the Harvey Award nominated creator of The Dreamer from IDW, and her husband Mike designed her website. I first met both of them at the same Wizard World that I first hung out with Alan, but again I’ve known Lora for a few years from online. They were waiting for us to arrive at 1am local time, and we stayed up a few hours catching up. 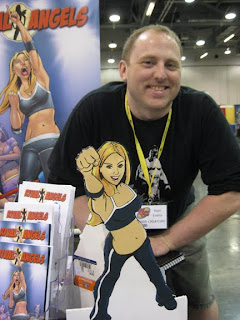 SATURDAY:
In the morning we had bagels, and then took off for the convention center. Alan and I went and set up the table, while Lora and Mike went to set up theirs. Alan and I were in Creator’s Commons (usually called “Artist Alley”) next to many talented individuals. The first day was kind of a slow day for sales for me, but I was able to push Alan’s books quite a bit. The show has a lot of family and youth attendees, and @$$hole! is a very teen-rated book. However, I had some sketch cards to tell the kids about, and was doing commission sketches to help make up the difference from the books sales.

At one point Alan offered to watch the table and I wondered around and found some of my friends, writers Paul Storrie (Robin Hood, Gotham Girls) and Bryan Glass (Mice Templar). I also made it around to the Comic Related table, where they were handing out cake! 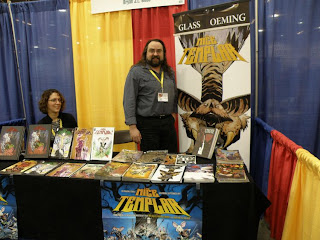 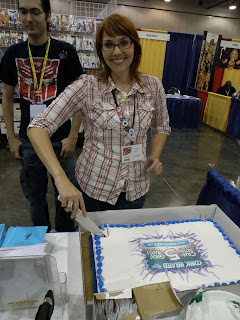 The Dreamer creator and Harvey Award nominee cuts the first piece of cake (photo by comicrelated.com)

The evening wore down with a local musical guest followed by a costume contest, and then the convention ended for the day. After the con, Lora, Mike, Alan, Paul, Bryan, his wife Judy, and myself all went out to dinner at a local micro-brewery. Many laughs were had, and then we called it a night early. We were all still exhausted from the previous late night when Alan and I arrived. The plan was to watch some Firefly and relax.

Upon getting back to the house, we started talking and never got around to watching the TV show. Instead, we watched videos on youtube and laughed our way through the evening well past when we had planned to go to bed. One of the videos Lora pointed out was a hilarious bit about George Washington (not workplace friendly for language):

SUNDAY:
After breakfast, we all piled into the car and headed back to the con. The crowd was heavier that day, and we had a panel at 12pm on Making Webcomics. Several people actually approached the table and asked Alan and I about the panel, where it was located, and what we would be talking about. My buddy Steve Horton (Tierra, Strongarm) made an appearance for the panel, which consisted of Lora Innes, Alan Evans, Wes Molebash (You’ll Have That) and Thom Zahler (Love and Capes). The panel went pretty well, but like most of the web comics panels that I’m on we could have used another hour or so to talk.

After the panel, Alan and I went back to the table and started selling like fiends. The last sales of the day really picked up, as everyone was out trying to make deals before they left. Several people commissioned some sketches from me, and I even participated in a charity piece to benefit Relay for Life.

After the con ended, Alan and I went for ice cream with Lora and Mike. After that, it was time for the 6 hour drive home.

Overall, Mid-Ohio was a fun experience and a great time to see old friends and make new friends! Alan and I are already talking about attending next year in November for their 30th anniversary show.

Mid-Ohio Comic Con 2009Uncategorized
Video Game Review: Uncharted 2 – Among Thieves multiplayer beta demoUncategorized
We use cookies to ensure that we give you the best experience on our website. If you continue to use this site we will assume that you are happy with it.Ok