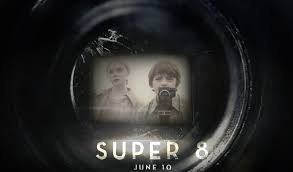 Movie Review: Super 8 (2011)
Director: JJ Abrams
Cast: Joel Courtney, Jessica Tuck, Joel McKinnon Miller, Kyle Chandler
Plot: A group of kids in the 1980s sneak out of their house to film a scene from a movie for a festival entry. However, they witness a train crash that leads to the release of a creature. Suddenly the town is experiencing black outs, people are being attacked, and soldiers invade looking for the creature. Can the kids find the creature and save the town before the soldiers do?

So what is this movie, you may be asking yourself? If you take the characters from Goonies (except instead of hunting for treasure, they film movies), the monster from Cloverfield, and the plot from E.T., then you have this movie in a nut shell. It’s E.T. for a modern audience. Except the monster’s not cute, and there are no Reese’s Pieces.

This doesn’t make the movie less enjoyable in any fashion. I for one loved all of the movies that inspired this flick, and JJ does a great job putting together enjoyable and realistic characters and a fun fanciful situation for them to play in. The acting in the flick is serviceable. The adults in particular are a bit on the stiff side, especially Kyle Chandler (Friday Night Lights), whose range goes from mad to pissed off. Seriously, the guy just plays an angry dude the whole time. And even when given the opportunity for closer and redemption, the guy just looks mad about that too.

The kids do a better job than any of the kids from the Harry Potter flicks. Pick any one of those flicks, and these kids do a better job. It’s still not great, and I of course rip those kids acting apart every chance I get, but those tend to be the modern standard of young actors – so I use it here as my basis of comparison. It’s stiff but serviceable.

Basically if you enjoyed those 80s flicks, you’ll probably like this flick – just understand this is quite a bit darker, and the kids swear a lot (I swear I heard the word “shit” in this flick more times in 5 minutes than I had in the last 4 Lethal Weapon movies combined).

It’s a fun flick to see in theaters, but I didn’t feel like it had to be seen in theaters. But certainly worth a watch.

Movie Review: Bridesmaidsmovie review
Movie Review: X-Men First Classmovie review
We use cookies to ensure that we give you the best experience on our website. If you continue to use this site we will assume that you are happy with it.Ok