Video Game Review: Final Fantasy XII (2006)
Platform: PS2
Developer: Square-Enix
Official Website
Plot: For those of you who remember the game Vagrant Story on the original Playstation, or the amazing Final Fantasy Tactics on the same system, this game takes the designs from one and the world of the other to create the most fun Final Fantasy game I’ve played to date.

The game is about an invading nation taking over the nearby kingdoms using a new combination of magic and technology. You play a group of rag-tag “sky pirates” that don’t actually do any pirating, while you traverse the land trying to do…stuff.

The plot kind of takes a back seat to the gameplay, in all honesty, and it doesn’t help that I’ve been playing this game for 120 hours over the last 3+ years.

I like that random battles (and entering a “battle mode”) are basically gone in this game, as you instantly initiate combat with enemies you can see on screen while moving around the world. A blue line leads from your character to the enemies they target to indicate that an action is going to take place – and a red line stems from the enemies. There’s no “battle screen” or ending screen like that – nothing interrupts the gameplay, which is fantastic in my book.

So basically, when I popped in FF XIII I was disappointed to discover the series go back to form. Sure you can see the enemies on the screen, but you enter into a battle screen and lose control of anything but the combat actions. But I digress.

In FF XII, you have full control over your characters in combat – from movement to actions. You can also program the actions of your party members using a “Gambit” system. This is very similar to what was in Star Wars: Knights of the Old Republic, except you have to find or buy Gambit actions. That part wasn’t my favorite of the game, but programming my characters to heal themselves and continue engaging in combat was very rewarding. Eventually the fights almost control themselves, and you really just make minor management adjustments to actions to keep your party alive. 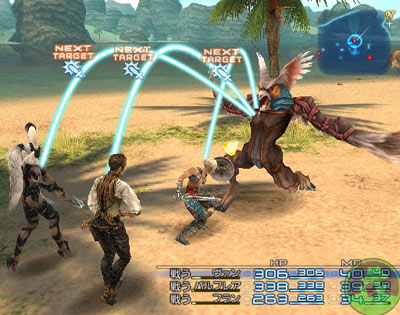 I won’t linger on this review, since the game’s been out forever and the system isn’t even the current generation – but if you do like a good RPG game that’s fun to play, I recommend dusting off the old PS2 system and popping in this game.