I was invited to be a guest at Anime Iowa this year, a 17 year old show located in Coralville, IA. It’s a nice sized show (approximately 3,500 attendees) at a gorgeous hotel, and with a very fun and energetic staff. Seriously some of the nicest people I have had the pleasure of working with at a convention.

This year the guest line up included a lot of people I had not met before, but who by the end of the weekend I would become fast friends.

THURSDAY:
I flew out from O’Hare around 11am, arriving very quickly at the airport in Cedar Rapids – which is right down the road from the convention. My liaison met me and several other guests at the airport, and we all piled into the car and drove over to the con. The guests got their rooms and unpacked their stuff, and we decided it was time for food. The group went to a brewery across the circle drive from the hotel, but upon discovering they were out of most of their food and beers, a small group of us went across to the other side of the circle drive to another brewery.

I was join by Jennifer Blake (My Little Pony) and her plus one, Suzanne – who was new to the comic and anime scene. We instantly bonded, since I was in a very similar situation with Beth. The three of us spent a good chunk of the weekend together, hanging out and forming a strong and fast friendship. 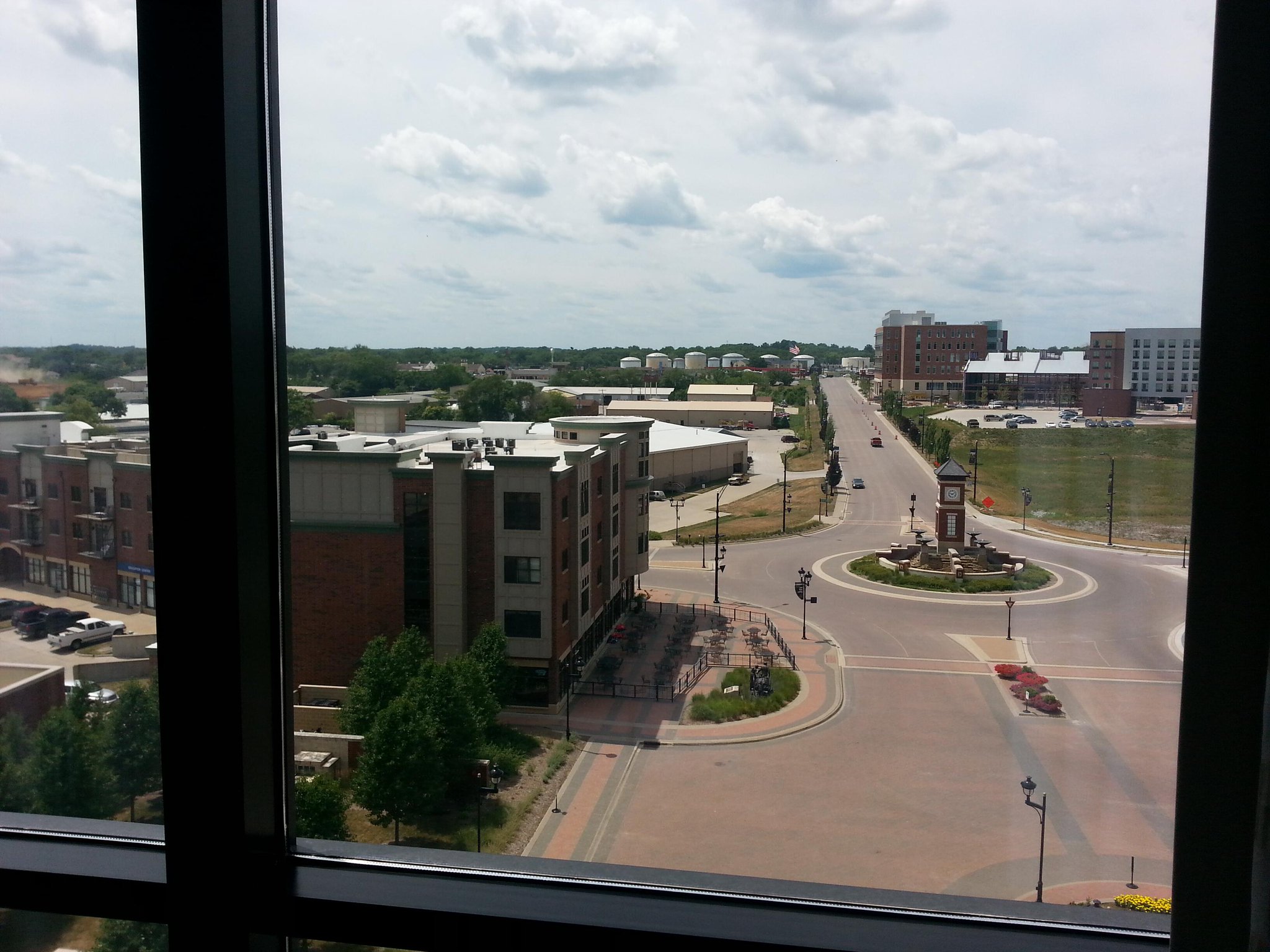 The view from the hotel room, looking out at the circle drive (and the breweries).

After lunch, the group went to the floor to check out the space and tour the convention a bit, and then headed to the store to buy some provisions (apples, snacks, booze, etc), including some much needed art supplies for our table set ups. After that, we had a quick drink and draw in my room – I knocked out 37 new cards, including 16 brand new designs. The girls disappeared briefly to get us some late night dinner (Arby’s, so delicious), and then we all went to an all guest meet and greet with the staff and sponsors.

After the meet and greet, I went back to the room to finish up a few cards and then headed straight to bed.

FRIDAY:
Friday the show wouldn’t start until 4pm, so there was plenty of time to start the show off right. I opened the day with an hour at the gym. Working out at a show is quickly becoming one of my favorite con traditions. First off, the gym is almost always empty, so there’s no worry about having to wait to use a machine or some free weights. Secondly, working out in the morning fills you with energy – so I feel like a million bucks the day I work out, and I’m set to go for the entire day (if not the entire weekend). Thirdly, and this didn’t apply to this show, but it’s also a great way to connect with some of the other guests if they join you. Some of my comic friends have attended the gym with me in the past, and it’s a fun time to hang out and pump some iron (or run on a treadmill).

The booth! And a dude in the corner, trying to charge his cell phone….

After the gym, I headed down to the restaurant in the hotel for breakfast, and then went to set up the table in artist alley (called The Marketplace). I worked on some additional sketch cards for a few hours, and then the show floor finally opened. Traffic was steady for the first hour, and then the guests were called away quick for Opening Ceremonies. The main programming room was filled with attendees eager to check out the guests of the show, hear our opening dialogues, and find out what kind of panels we were giving that weekend. After my stint on stage, I headed back to the show floor to keep selling.

Book sales started off a little slower than usual, but sales for sketch cards and commissions were high. Much higher than previous shows, which helped to offset any revenue from the books. Fans were much younger than shows I typically attend, and many were in cosplay – some even cosplaying as original characters. There’s a fine art to crafting a well made costume, and some of the guests there were helping attendee hone those skills even further – and the effort showed in the work.

After the show floor closed, I ran off to grab a quick bite with Jennifer and Suzanne, then headed off to my first panel of the weekend: Making Webcomics. The room was filled with a very attentive and curious crowd, many of whom didn’t have a webcomic of their own but were interested in the process and learning about how to make webcomics. After the panel, I headed back up stairs to work on some sketch cards (to fill in the gaps that had formed from the day’s sales), and then headed off to bed.

SATURDAY:
I got up early the next morning to grab some breakfast, and then headed off to the floor to set up. The floor opened and waves upon waves of attendees walked the dealer’s room, buying up whatever cute stuff they could get their hands on. The books started to sell better, but the art and cards kept moving like mad.

The table was frequented by several of the voice actor guests of the show, and even several of the staffers (and some regular fans, who were excited to see some new books on the table).

I received an e-mail from a buddy of mine who was helping me with some creative projects for my wedding later this year, and started showing some of them off to some fans. “Even though I’ve only put out 2 books this year so far (and written 6 other stories waiting to be published), I’ve also made a mini-comic for my wedding invitations and filmed a few special projects – which I’ll no doubt show off after the wedding,” I kept telling people. I’m not slacking off, I swear.

The cosplaying guest with her commission piece (cosplaying as a different character today, obviously)

Another commission (sketch card, in color) of a fan in his cosplay

At the end of the day, I was approached by the guest relations manager, who asked if I would be willing to help judge the art show. This was apparently something the show was re-introducing, and so wanted some of the guests to be judges of the art. The process took about an hour, and there were a lot of very talented entries in a bunch of different art forms – pencils, digital colors, oil paints, cross-stitch, jewelry making, and many more!

After the art show judging, I ran off to dinner with Jenn and Suzanne. Jenn had her first panel that night, and was a little nervous – but she had a killer game plan for how to rock it. The panel room had a line outside that went around the corner, and the room filled to capacity very quickly – the show immediately announced they would do another panel on Sunday to account for the overflow. Jennifer rocked the panel, talking about how she got started with IDW working on MLP and then opening it up to Q&A. The questions were great, and Jennifer had a ton of fun answering the fan favorite questions. She even made a few announcements IDW authorized her to make earlier that day! It was a huge success, and I left right from there to my Evening with Trevor Mueller panel.

The My Little Pony fan panel was standing room only, with guest artist Jennifer Blake hosting

The Trevor panel was well attended, and I told some new stories that went over well with the crowd (and the handful of people who had heard one or more of these panels before). People had a blast! And I always love giving the panel, so it was a fun time.

After the panel, I returned to my room to get some sketch cards done when I heard a knocking. It was Jennifer, who was excited for her first very successful panel! We celebrated and chatted about the successes, and about how much fun we were having this weekend. She was blown away by the support of the Pony fandom, and super excited to get started on her commissions from earlier that day. I, however, had some other plans. Earlier in the day I had been invited by Samurai Dan and his wife to participate in a 1:45am “Cards Against Humanity” game (that ran until 3am), since none of the other celebrity judges wanted to stay up that late. I was starting to lose my voice and the microphone wasn’t working so well in the room, but the crowd was kind enough to quiet down for me whenever I read aloud one of the answers. It was a hilarious time, fun for 18+ attendees (Cards Against Humanity is not a game for kids, FYI).

After the panel I headed upstairs and went straight to bed. I was exhausted, and had one more day to go!

SUNDAY:
I woke up and grabbed some breakfast before the show floor opened, then went to set up. I received a text about a guest / sponsor brunch, and the show found someone to cover my table while I attended and mingled with some sponsors (had I known about this sooner, I would have slept in a bit and opened the table later – the food was great, and the sponsors were all cool peeps). After the brunch ended, I went back to the table to end my weekend with some strong book sales.

What was interesting about the books sales is that no one was interested in just getting a single book – they wanted all the books! It was a great counter-balance to end the weekend strong with the books selling, where the art was selling earlier in the weekend.

Various fans and new friends kept coming up to the table throughout the final day, to buy stuff or say their goodbyes, and before I knew it the show had ended and it was time to close up shop. But not before buying Beth a super secret special present!

The artist guests, from left to right: Jennifer Blake, Suzanne, and Trevor Mueller

After the show ended I hung out in the lobby for a few hours, saying goodbye to my new friends and thanking everyone at the show for having me out. I shared a few more wedding related secrets with the group, and then hopped in the car and went to the airport to await my flight back to Chicago.

Anime Iowa was a lot of fun, and while it was a younger crowd it was still a crowd with a lot of energy and passion for anime and comics. They asked great questions during the panels, and bought the books (and the art) from a bald guy many of them had not heard of before. I made some awesome new friends, and had an amazing time all around. I certainly hope to be invited back again next year – and I hope to see you there!

Beth received a gift from the trip – her own stuffed Totoro!