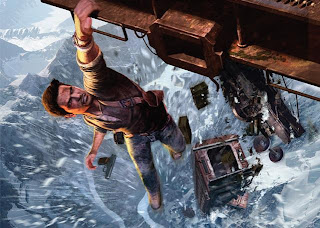 Video Game Review: Uncharted 2 – Among Thieves
Platform: PS3
Developer: Naughty Dog
Official Website
Plot: The game opens with fortune hunter Nathan Drake (a descendant of Sir Francis Drake, a great explorer) sitting in the chair of a train, blood pouring out of a gunshot wound in his stomach. Looking out the window, he appears to be in the mountains. Upon trying to sit up, he realizes that gravity is playing tricks on him – and that the train car is actually dangling from the side of a mountain cliff. Falls and breaking out of the bottom of the train, Drake watches in horror as the door falls far down into the valley below. Losing blood and moving slowly, Drake begins to climb the train cars to reach a safe area….

…and that’s where Uncharted 2 starts you off. 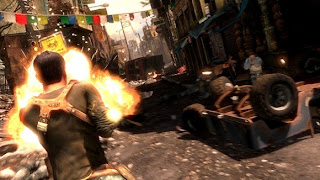 After the events of the first game, Drake is looking for his next score that is going to make him rich beyond his wildest dreams. Apparently separated from Elena (the journalist that followed his adventures to find El Dorado in the first game), Drake teams up with new love interest Chloe and her partner to follow the clues left by Marco Polo and find the Cintamani Stone from the lost city of Shambhala. Based on some historical truth but with a measure of fantasy and fiction (think Indiana Jones meets Tomb Raider…but a little less fantastic), Uncharted 2 is like the biggest action movie (but with a plot that actually makes sense) where you play the movie hero. Drake is a fun protagonist with a heart of gold and quick with the witty banter, and some sweet moves to get him through the levels against armed soldiers and a madman trying to gain ancient power for himself.

The gameplay is mostly duck and cover mechanics, with very fluid animation and intuitive controls. You also do some platforming and puzzle solving, but if you get stuck the game does give you hints throughout. I will admit to getting stuck in a few rooms because your path doesn’t stick out as obviously as in other games of this type. The path you’re supposed to take blends into the lush backgrounds like it was actually part of the world. This is not a flaw, but something that I’ve been looking forward to in gaming for a long time. A level of emersion that completely brings the world to life, instead of pointing out the path you should take. Thankfully, there’s not much penalty for dying if you make a wrong jump.

The game is very forgiving in it’s platforming, though. Jumps that appear to be impossible are very probable with Drake being one of the most athletic characters in a game (even with a bullet in the gut).

The action sequences are what stick out to me the most in this game. While the first game focused more on the duck-and-cover mechanics, this game enjoys marrying more the gun play with fist-a-cuffs. The ability for Drake to duck behind cover, shoot some guys, grab a dude that’s running him to him and pull him over cover and punch him in the face, then run out shooting and get into a fist fight with another enemy is jaw-dropping to watch, and even more fun to play.

I’ve already reviewed the multiplayer beta for the game, but I’ll add here that they have added additional content, play modes, maps, and even extended the maps that were available in the beta! I’m not much of an online game player, but with some friends this game is rather fun – mostly because I can actually hold my own.

If you own a PS3, you need to get this game and the first one. They are fantastic, hours of fun, and with a great story and great play mechanics. If you don’t own a PS3, then you should be jealous of me like I’m jealous of you (ie: I want to play Mass Effect). This is the game to own on this system, and probably the best game of the year!

Video Game Review: InFamousvideo game review
We use cookies to ensure that we give you the best experience on our website. If you continue to use this site we will assume that you are happy with it.Ok