Movie Review: Tron Legacy (2010)
Director: Joseph Kosinski
Cast: Jeff Bridges, Garrett Hedlund, Olivia Wilde, Bruce Boxleitner
Plot: Back in 1985, genius programmer Kevin Flynn (Bridges) created a new system of information called The Grid. With it, he created a program in his image to help manage and build this system into perfection, called Clu (digital Bridges), as well as a champion to defend it named Tron (digital Boxleitner). After tucking his kid in bed for the night, Kevin went back to the arcade where his secret office was and never came back. Now grown up, his song Sam (Hedlund) spends his days basking in the glory of being the inheritor of his father’s riches, but not following in his ambition to run his company Encom (think Microsoft). He does, however, break into the office every year and commit some form of cyber terrorism.

One day, Alan Bradley (Boxleitner) gets a page from Flynn from the arcade – which has been shut down since the 80s. Sam goes to the arcade and discovers The Grid. Once there, he comes to find that it was Clu and not his father that sent the page. Clu has taken over the Grid and is building an army to invade the world of humans – and the only thing he needs to succeed is the Master Disc, which is located on the back of Kevin Flynn’s back.

After being rescued from The Games by a mysterious woman / program named Quorra (Wilde), Sam eventually is reunited with his father. Now it’s a race against time to get back to the real world and stop Clu from the outside, before Clu’s army makes it out into the world of humans.

For those of you who don’t remember Tron (and I can’t blame you if you don’t. I mean, it was only the first live-action movie to use computer animation effects, was one of the most expensive movies ever made, and also is a little-known cult favorite among sci-fi nerds), you may find this movie a little lacking in the explanation. Sure they explain the core of The Grid and the players, but they make a lot of references to the first flick that may be lost of audiences. Namely myself, who hasn’t seen the original Tron since college. This isn’t necessarily a bad thing, but the movie can be a little difficult to find – especially since Netflix has a backlog waiting of people who, like me, wanted to get caught up before seeing the new flick.

But let’s not dwell on the original, let’s talk about this flick.

Tron Legacy is everything I knew it would be, but is sadly lacking some key areas – namely story and characterization. Like many “visual feast” movies, this one introduces characters and we understand that we should like them, yet we never really get a chance to know who they are. Take Sam for example: he breaks into his father’s company every year and hacks their systems, then goes home to crack a beer after a daring escape that involves jumping off buildings (or maybe he only did that this year, who can say for sure). Sure he has some understandable daddy issues, but that just doesn’t feel like enough depth to me.

The other problem with the movie is a lack of explanation for things. I call this the “Flynn Said It” rule, where basically Jeff Bridges makes a rhetorical comment and the audience is meant to take it as truth without explanation. For example, The Grid is going to change the world – but how is a world populated by personified programs that like to party, dance to rave music, and hang out at gladiatorial games supposed to help improve humanity? My favorite was when he said that Clu could only change programs, but then how did he page the outside world? To me this feels like the deeper threat: that Clu has found a way to communicate with the human world, and therefore is dangerous whether he gets out or not. But we don’t dwell on such things in a movie that is sold on (and it’s best points are) the visuals. 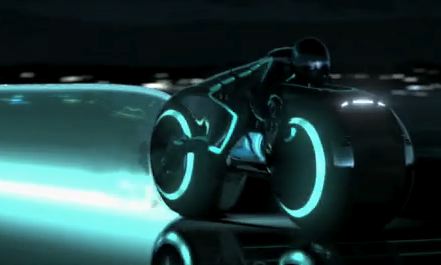 Tron set the standard of computer integration (literally) for sci-fi movies. Unfortunately, like other sci-fi movies that set the bar, the sequels are held to a bit of a higher standard. Like we want them to set it even higher. (Think Terminator 1 and 2, which set the bar for special effects in movies, and then compare it to T3 which was more of the same…and a piece of garbage). Tron does a pretty good job on improving upon what came before, but don’t expect to see anything new here. This isn’t necessarily bad, though, because what Tron lacks in redefining special effects it makes up for in visual style and a kick ass soundtrack. I can see this movie being huge among cosplayers, fashionistas, and Halloween costumes. But the production designers did exactly what you want to see in a sci-fi sequel – built upon what came before, modernized it, and made it cool again. And Tron delivers that in spades.

The movie capitalizes on the things that made the original awesome (light cycle bikes, memory disc combat, lights on people’s clothes) and has made it cool – and then made even more stuff (light planes, martial arts disc combat, LED lights on clothes). And the movie delivers the cool, for certain. Not only in the visuals, but also in the music.

The soundtrack was done by Daft Punk, who many anime and sci-fi fans should be familiar with. They do a good job of taking a movie score, adding in 8-bit techno music, and making it into something that I’d buy in a store (or download for my mp3 player). Like the production designers, they took what came before and they improved upon it – modernized it – and even added a little something of their own to it. If you liked soundtracks like The Matrix, you should probably get this score.

So there are a few things that I hope I can prepare you for in this movie that will make it a little more enjoyable. First off, skip the 3-D. The movie wasn’t shot in it (entirely), and it effects weren’t designed for it. Sure, they’re there, but why spend money on a fully 3-D movie when you only get one that includes a little 3-D? And certainly nothing as spectacular as Avatar. It wasn’t “bad” per se, but it certainly wasn’t necessary.

Second is the visual effects, specifically when it comes to Clu – or as I like to call him, CG Jeff Bridges. The animators did a good enough job for the work to be passable, but when on the screen with real actors you can tell that there’s something just not quite right with the face. The way the mouth movies, something in the eyes – whatever it is, it looks off. It’s kind of a nit picky thing, but is sure bugged me while I was watching the movie. So be prepared for that.

So if you’re one of those skimmers who goes straight to the end of a review, this part’s for you: the summary. Tron Legacy is a visual feast of a flick with some cool ideas and concepts that it never really fully fleshes out. But that’s not necessarily a bad thing for the casual movie-goer. The movie has style in spades, and an awesome soundtrack that will appeal to movie fans and video game nuts alike. Basically, kids will love this movie – and sci-fi fans will enjoy the visual aspects of it. Fans of the classic movie have little to fear here. It does a good job of doing what a sequel should: taking what came before, modernizing it, and adding to it.

Go see Tron Legacy. But save your money and skip the 3-D.

Movie Review: Morning Glorymovie review
Movie Review: No Strings Attachedmovie review
We use cookies to ensure that we give you the best experience on our website. If you continue to use this site we will assume that you are happy with it.Ok