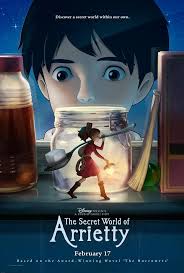 Movie Review: The Secret World of Arrietty (2010)
Director: Hiromasa Yonebayashi
Plot: Based on the book “The Borrowers,” this story finds a family of little people living inside of an old house in the country owned by a little old lady. Borrowers take little things that they need – tissue paper, sugar, etc – and doing so is an adventure because the world outside the walls is so large and dangerous. When the house owner’s grandson becomes ill (heart problems), he comes to live with her and sees Arrietty. Whenever a Borrower is seen by a human, the family has to move – but Arrietty doesn’t want to move.

As the boy continues to try to help the family of little people living in his grandmother’s house, his grandmother starts to become suspicious and figures out that the family does in fact exist – and wants to prove it to the world! Can the boy and Arrietty keep her family safe from the suspicious grandmother, and learn to co-exist in peace? 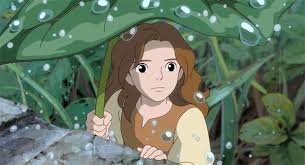 This movie is, like most Studio Ghibli movies, BRILLIANT. Another imaginative journey that takes you, the viewer, to a unique world that is fully fleshed out and interesting. You want to talk about a world you could spend forever and a half in, check out the Secret World of Arrietty – it’s our world, but everything is tiny. And therefore, much different and more dangerous.

The lazy fat cat out in the yard? Not a threat to humans, but it is a threat to the little people. The mean old crow living in the trees? How about the bugs that live in the walls of your old country home?

All of these things are touched on in the movie, but I feel like they could definitely be blown out as a series or sequels (which, I’m sure they will not do, but if they did I would likely give it a view). Like all Studio Ghibli movies, this flick feels too short to cover off on all of the cool and fun things you could do in this world. But that’s not a bad thing. “Leave your audience wanting more” is a good way to stay in business. 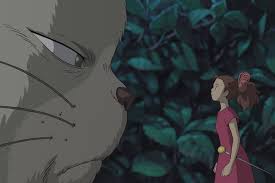 The animation, as always, is top notch and the colors and visuals are so jaw-dropping all other cartoons will pale in comparison once you’ve watched this flick. There is so much imagination, so much going on in front of you and behind the scenes, that you’ll really want to be more immersed into the world. The music, too, is very stand out. So much so I went to download the soundtrack as soon as the movie ended. GET THE SOUNDTRACK!

The voice work is serviceable. I’m not a fan of anime dubs, but Studio Ghibli movies I tend to be able to tolerate more than others. Probably because Disney puts so much time and effort into the English voice cast direction. The Japanese language track is where this movie is at (for me, anyway), since there’s so little emotion from any of the English voice characters, other than from Arrietty herself.

The story starts off simple enough, and Arrietty’s world is so interesting that you will get lost in the visuals and how just getting to the kitchen is an adventure. But for me, the story really came together when the boy and Arrietty join forces to save her mother. No spoilers, but to see Arrietty finally doing things on her own and being the hero we know she can be was very rewarding – and the things the two of them have to do was just incredible!

However, like the Cat Bus in My Neighbor Totoro, there’s just not enough of this kind of stuff in the movie. Again, it leaves you wanting more. It’s where the movie peaks, and when it’s over you’ll want to re-watch those scenes over and over again. 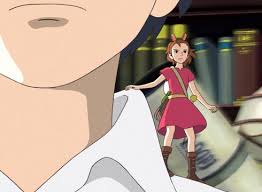 All in all, like all of the Studio Ghibli movies, Secret World of Arrietty is worth adding to your movie collection and watching on a regular basis. There are fun and colorful visuals, great characters, superb animation and music, and the story is pretty awesome. For anyone who read The Borrowers as a kid, it’ll be a nostalgic trek down memory lane (they take some liberties in the movie, mind you, but you’ll want to go find the books again to read them to your kids…or find some kids to read them to).

Go out and buy The Secret World of Arrietty.

Movie Review: The Hobbit An Unexpected Journeymovie review
Movie Review: Life of Pimovie review
We use cookies to ensure that we give you the best experience on our website. If you continue to use this site we will assume that you are happy with it.Ok