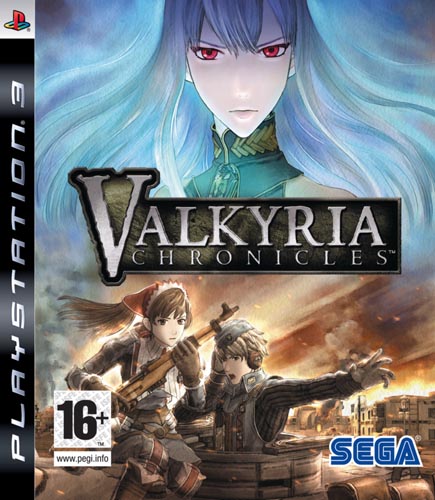 Video Game Review: Valkyria Chronicles (2008)
Publisher: Sega
Systems: PS3
Official Website
Plot: Set in a fantasy world very similar to our own, you play as a young commanding officer enlisted in the militia when your country is invaded by a super power wanting to conquer your country for minerals. Out of over 100 recruits, you build and train your squad. Throughout play, you learn more and more about each of the characters you’ve selected – which makes this game unique because you do learn about even the supporting characters, and there are real consequences if you fail. Your characters can die. It’s a great experience, but I digress.

The game is played by selecting your team to meet the mission objectives, and positioning them on the game board. From there you spend CP points to perform actions – moving characters, and taking out enemies. Once all of your CP has been spent, the enemy gets to take their turn and so on. Ultimately you have about 20 turns to complete your objectives – but it usually takes less time than that.

There are several classifications of soldiers, each with their own strengths and weaknesses:

It’s difficult to describe the game and give it the credit it deserves. This game is flat out amazing – especially if, like me, you enjoy a good story and a strategy game. You only play missions, so the rest of the game is in-engine cut scenes (mostly talking heads, unfortunately) rendered in a unique way. Just like you see in the images in this blog post, the game has an anime style but is rendered in a color pencil texture. It’s difficult to get into the story too much, as there are a lot of twists and turns through (main characters die, battles are won or lost, and many secrets get revealed throughout).

The game is gorgeous, the gameplay is excellent, and it’s been out for a while now – so you’re probably going to find it for cheap. Buy it. Buy it and love every second of it.