For those of you who remember, my good friend Kim Chapin passed away very recently. But the last thing she mentioned online – both her twitter and her facebook – was her desire to come to Chicago and see a Power Rangers Burlesque show. 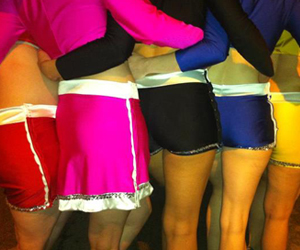 So in her honor, a group of us decided to attend the show for her. What’s kind of neat about the Gorilla Tango Theater is that they have several nerdy burlesque shows.

Super Mario Bros, Indiana Jones, Star Wars, Lord of the Rings, and a general Super Hero show are on the list right now. Seriously worth checking out. And they’re all right here in Chicago at this intimate theater over by the Western Blue Line stop.

But I digress. Power Rangers Burlesque was a show that totally got how cheesy the show was, and combined it with some talented actresses who strip to a story. (Please note: all of the names were changed in the burlesque show for copyright reasons, but for the sake of relation I’ll put the actual character names from the TV show in the review below).

THE STORY
Rita is up to her old tricks again, and has unleashed a monster on Angel Grove who emits beams of lust onto the citizens…and it also affects the Rangers and Alpha 5. At some point, everyone and their mother gets affected by this beam – including Billy, who’s quite shy and prudish.

The Rangers go searching for the monster and, knowing that Rita likes to target the shy or depressed kids, they start at all of the popular teenager hang out spots: the school, the mall… and the abandoned rock quarry.

They fight putty’s, have dancing battles with each other, and even have to fend off the advances of Rita herself – all while trying to keep public opinion of their efforts high.

Eventually the monster is revealed and grows to a monstrous size (in a rather cool transformation sequence for theater, actually) and the Rangers have to summon their Dino-zords to defeat it.

The show was actually pretty awesome, poking fun at the show in all the right ways. The writer clearly “gets it,” including public service announcements at all the wrong times, poking fun at the fact that battles always happen in abandoned locations, and showing the silliness of teenagers trying to save the world. And the stars were able to pull it off. All while throwing in sexy dance moves – and revealing clothing that comes off.

The girls have to get some mad props, because 1) they’re participating in an adult version of a kids TV series, 2) they’re playing what were originally (mostly) male characters, and 3) they’re pulling off the hokey and playfulness of the show, as well as mixing in the adult nature of “the tease.” And it works.

The music was not from the show directly (Nightwish “Wish I had an Angel” replaced the theme song), but it was close enough for the audience to identify and remember the actual music from the series. They had some nice lighting for the small stage they were on, and even a few carefully choreographed group dance numbers that were rather impressive.

Props were sparse but recognizable. They had a tube for Zordon to appear inside – which was a hilarious scene were Alpha starts dancing for him, while he quickly sends the Rangers off to stop the evil…and then watches Alpha dance with a big pervy smile on his face.

The one thing the show was missing were sets. Sure, in low-budget theater fashion, the actors do tell you where you are – and if you’ve seen the show (especially recently) then you’ll know exactly where the characters are. However, people who have never seen the show may get a little lost sometimes.

Sure, they would get that an abandoned rock quarry wasn’t a common hang out spot for teenagers (at least no teenagers I know), so they was able to laugh at the joke – but they may not be able to relate to it the same way super fans of the show could have.

***{SMALL SPOILERS}***
My favorite part was when Bulk and Skull came out to ask the audience for money, and tried to do some burlesque dancing. It was pretty hilarious, and the actresses playing the roles got the bumbling and physical comedy part down pat.

I can only hope that the dollars audience members put into that bowl helped some of these girls pay their way through college…or dental school.
***{END SPOILERS}***

All in all, it was a small show within an intimate venue, but a really fun time and totally worth checking out. I’m curious to see some of their other shows (how awesome would Super Mario be as burlesque?). The ultimate combination of Power Rangers and boobs. Kim would have loved it.

Operation Super Secret Fun Date NightLife
Recipe: Asian Pot RoastLife
We use cookies to ensure that we give you the best experience on our website. If you continue to use this site we will assume that you are happy with it.Ok