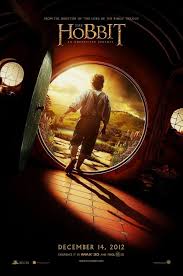 Movie Review: The Hobbit An Unexpected Journey(2012)
Director: Peter Jackson
Cast: Ian McKellen, Martin Freeman, Richard Armitage, Andy Serkis
Plot: A prequel to the Lord of the Rings movie series, The Hobbit follows the adventure of a young Bilbo Baggins (Freeman). Who is, in fact, THE hobbit.

Hobbits are not the most social creatures, and almost never venture out of their land of The Shire. They prefer dull, boring lives filled with good food, good stories, and no excitement. So when Gandolf the Grey (McKellen) knocks on Bilbo’s door one day, it changes his life forever.

Gandolf has opted to help a group of dwarves, lead by their king Thorin (Armitage), and help them get back their kingdom from the dragon Smaug. To do this, they need a burglar – someone who can slip past undetected. And this is where Bilbo would come in.

After introducing the 13 Dwarves (Thorin, Balin, Dwalin, Bifur, Bofur, Bombur, Fili, Kili, Oin, Gloin, Nori, Dori, Ori) and explaining their plight, the group is off on a grand adventure to reclaim their kingdom under the Misty Mountains.

However, their journey will not be easy. The dwarves are being pursued by The White Orc, who was responsible for taking the great Dwarf kingdom of Moria and who has a personal grudge against Thorin. Thorin does not trust Bilbo, and questions his ability to be a help (rather than a hindrance) to the group. At the same time, Gandolf senses the return of a great evil in the land. Will the group of adventures be able to complete their quest and reclaim their kingdom, and all of the riches guarded within?

I’ll give you a hint: not in this movie…. 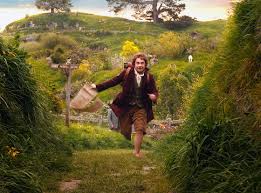 The Hobbit is actually the shortest of the LOTR books, yet somehow was extended out into three installments, creating yet another epic trilogy through Middle Earth. While there are a lot of characters in the story, you only really need to be familiar with a handful of them – the rest are background dressing, sight gags, or there for comedic effect.

The story starts off slow in the beginning, introducing you to the large cast of characters and their plight – trying to make you care about reclaiming their homeland as much as you cared about saving the entire world in the first trilogy. Unfortunately it falls a little short in this area, in my opinion. But then again, this book did come before LOTR, so perhaps if you watched them in the proper order this wouldn’t be an issue.

Once the story gets going and the group leaves The Shire, the adventure and action almost never stop. You will see sights that defy the odds in this movie – from Thorin battling an army using only an Oak branch, a battle of wits and riddles, and even mountains beating the crap out of each other.

Yes, mountains do battle in this movie. While our adventurers are trying to cross over them. And it is EPIC.

Everything about this movie feels bigger than the previous LOTR installments, even though the urgency and needs is considerably less. But that doesn’t stop The Hobbit from being a fun entertaining movie, and another example of fantasy done right. 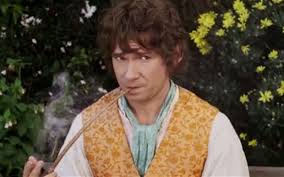 The directing and music are superb, but that wasn’t ever a question. It was the same team who put together the excellent LOTR trilogy. There is a new song in the mix, which is the Dwarves song they sing in the teaser trailer (see second trailer, below). And it’s a great song.

Overall, I dug this flick and I’m looking forward to more. Sure it’s not as epic as the previous LOTR movies (it preceded it in terms of story chronology), but damn if it doesn’t do what it sets out to do: make me want to see more!

Movie Review: Punisher War Zonemovie review
Movie Review: The Secret World of Arriettymovie review
We use cookies to ensure that we give you the best experience on our website. If you continue to use this site we will assume that you are happy with it.Ok