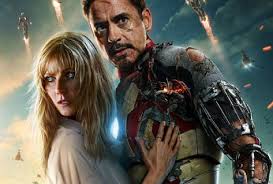 After the events in Avengers, Tony Stark is having some trouble sleeping. So instead he goes into his basement and tinkers on the Iron Man technology – having created a new suit, called Mark 42, which can travel to him and attach itself to his body wherever he may be. Meanwhile, a new terrorist called The Mandarin (Kingsley) has been bombing cities around the world, leaving no traces of the explosive devices. War Machine, now Iron Patriot, piloted by Colonel James Rhodes (Cheadle) has been investigating, but cannot figure out how he’s doing it.

When an explosion goes off on American soil injuring Tony’s friend Happy (Favreau), Tony gets personally involved and calls out the Mandarin – causing his home to be attacked and Tony to be considered dead. Now, with little resources at his disposal, Tony must find the connection between these bombings and stop this new threat once and for all. 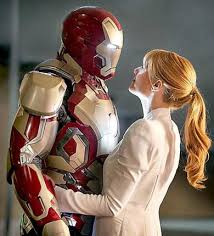 I’m torn on how I feel about this movie (and here come the spoilers). So let’s break out the positives and negatives:

So how did I feel about the movie? Well, overall I liked it. It was pretty funny like past Iron Man movies, and it was great to see what a desperate Tony Stark would do. But the movie was just very dark – the villains very frightening – and the themes very contemporary. And the big twist left me with a bitter taste in my mouth. I was entertained when happened, but I spent the entire movie asking if the twist was necessary. Or if there would be another twist that said, “Just kidding. That twist was a lie!” But it never happened.

I’m sure I will be buying this movie when it comes out, but it didn’t feel like the first installment of Phase 2 of the Marvel movies. It felt like a goodbye to RDJ – and while I understand he was only contracted for 5 movies (come on, Hulk barely counted) I really wanted a better teaser for Avengers 2, Guardians of the Galaxy, or Thor 2 later this year. I wanted a twist that didn’t undo decades of comic book continuity. I wanted something to be excited about after this movie ended and the scene after the credits was over.

But in the end, the movie just left me wanting.

It’s not the same tone as what Marvel did with Phase 1, and that’s disappointing. And unfortunately they didn’t give me anything to be excited about for Phase 2. So the question remains – how do I feel about the movie?

I think I need some more time to process….

Movie Review: Life of Pimovie review
Movie Review: Argomovie review
We use cookies to ensure that we give you the best experience on our website. If you continue to use this site we will assume that you are happy with it.Ok