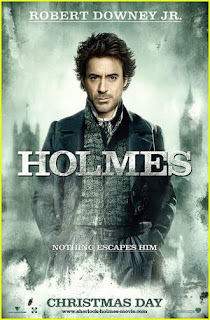 Movie Review: Sherlock Holmes (2009)
Director: Guy Ritchie
Cast: Robert Downey Jr, Jude Law, Rachael McAdams, Mark Strong
Plot: Upon stopping the evil Lord Blackwood (Strong) from killing his next victim, Holmes (Downey Jr) and his partner Watson (Law) watch as the man is hanged. However, several days later Blackwood’s crypt is opened from the inside and he has started killing again. Is something supernatural at work here, and what does Blackwood’s resurrection have to do with the return of Irene Adler (McAdams), Holmes old flame? 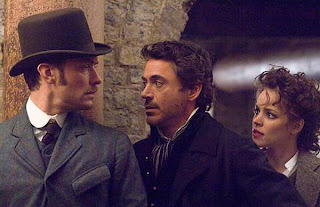 Holmes and Watson are back on the case (for the first time, in this movie franchise), dodging martial arts trained criminals and explosions. That’s right, kids. In this non-origin story first movie, Sherlock Holmes solves mysteries…with his fists!

While there may be some slight exaggeration in that statement, the mystery of Blackwood’s resurrection seems to just be the road that takes Holmes and Watson from one fist fight to the next. I’m sure the more ADD among us will absolutely love it (and I admit that I didn’t mind it as much as I feared I would), but a little more sleuthing and a little less punching would’ve suited me just fine.

But that’s not to say that the action isn’t entertaining. Holmes is such a smarty that he actually figures out how a fight is going to happen (in slow motion with great details on how much damage would be inflicted) before he moves on it – which takes all of 3 seconds to execute. It was a brilliant testament to Holmes intellect and physical prowess.

And there certainly is drama (and yes, sleuthing) throughout this movie. Watson is breaking up the dynamic duo by getting married and moving out, and Holmes only real flame has returned to his life under mysterious circumstances. There are secret societies, conspiracy theories, and clues throughout – but sadly, it’s difficult to put all of the pieces together and solve the mystery before the end because, well, Holmes is leagues beyond everyone else when it comes to solving cases. His knowledge and insight into how events unfold doesn’t come to light until the very end of the movie, which does have a satisfying ending to a roller-coaster ride of a movie.

I admit to having low expectations for this flick, and was pleasantly surprised having seen it opening weekend. It’s an enjoyable Hollywood romp through a modernization of Holmes. And while it wasn’t the Hitchcockian thriller that I was hoping for, it does have enough elements of that to have kept me in my seat for the duration. That said, it may be best to watch this movie at home so you can revisit parts after the mysteries are revealed.

Movie Review: Evangelion 01 – You Are (Not) Alonemovie review
Movie Review: 9movie review
We use cookies to ensure that we give you the best experience on our website. If you continue to use this site we will assume that you are happy with it.Ok