Video Game Review: Assassins Creed 3 (2012)
Publisher: Ubisoft
Systems: PS3, XBOX 360, PC
Plot: Like all Assassins Creed games, there are two plots going on here: the A plot (the plot of this particular game), and the B plot (the larger narrative running throughout the AC games). We will start with the B-plot: Desmond Miles, modern day assassin in training, and his crew go to caves in American to discover what is going on with the “ones who came before,” and stop the meteor from killing all life on the planet. To do so, they need to find the missing key to the caves by diving into the Animus – the device that allows Desmond to relive his ancestral history through his DNA memory, learn new assassin skills, and ultimately unravel the larger mystery about these beings.

Desmond’s journey also takes him to various Templar installations to acquire power supplies to open more of the caves, and allow him to get the key to unlock the way to save the world.

His Animus adventures have him reliving history through Native American Conner in the 1770s leading up to and through the revolutionary war. Conner’s family is brutally murdered at the beginning of the game, so he spends the bulk of his time training to get revenge = and basically being angry at everyone he meets. Conner’s past is somehow tied into the key, and the salvation for Desmond to save the world. To find out how, you have to play the game…. 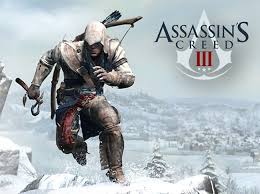 From a gameplay perspective, a little has changed here from the previous games. Combat is a little more like Batman Arkham Asylum in that you only have to hit a button to block or counter, as opposed to holding one of the shoulder buttons. Conner has some new parkur moves previously unavailable to the other ancestors, among them being able to traverse wilderness (which is pretty sweet).

The game is HUGE, with a lot of the environments being in the untamed wilds between cities. There are a lot of side missions here, but unlike previous games the side missions felt a little unnecessary and tacked on. Sure, they help explore the world a bit more, but you don’t need to do them to get money to buy some upgrade to your house or village, or to your armor – all of those upgrades from Ezio’s game days are gone. You can help build up the areas around your house by doing some Homestead missions, but these are more “seek and find a person and help them do something” and then they move in and make goods available. Trading, while I’m sure a crucial way of life during the 1700s, feels unnecessarily confusing. Also, the game doesn’t do a good job of explaining how to do it, or how to react to situations that happen (ie: one time, my caravan was under attack and they said I needed to rescue them…but never told me how to do that).

One thing I really enjoyed about the gameplay was the ship-to-ship combat missions. I’m guessing a lot of other people liked this too, since the next game in the series has you being a pirate. These missions were fun and exciting, and a refreshing change of pace from walking around and trying to silently kill your targets.

In fact, my only disappointments in the game were two fold:

1) Characterization – Conner is a 1-dimensional and boring character. After seeing the breadth and change in Ezio over the course of 3 games, we return to a bland character with one goal in mind, and a straight laced bad-ass attitude that’s difficult to relate to (just like in the first AC game). This is unfortunate, because Conner has the ability to do so much more than in previous games, yet his character feels so stagnant and limited to just appearing at historical moments in time and participating for one reason or another to further his own personal goals of revenge. The missions, to him, feel like another thing you have to do to get someone to help you do what you want to do – avenge your family – and so the player feels this way, too. In fact, I skipped most of the side quests in this game (a first for me in the series) because they just didn’t help further the narrative or help me accomplish my goals.

2) The story – Conner’s story is probably one of the best of the ancestors to date, in that you really follow him through a single goal from beginning to completion. While this limited the character, it was satisfying to live Conner’s life and see a tighter narrative around him. There were a few hiccups in the narrative progression (in my playthrough, he was friends with George Washington, then hated him for a side mission for some reason, then was friends with him again — then hated him after a mission for something that really wasn’t his fault). No, my particular disappointment in the story comes from Desmond’s tale.

Unlike many AC fans, I was actually a huge fan of the larger story arc following Desmond. As he unlocked new memories in the past, he unlocked new abilities in the present. Sure there were some narrative hiccups here and there (ie: the mysterious departure of Kristin Bell’s character, followed by her random and not well explained death). But I always felt they were building to something awesome with Desmond becoming this bad ass assassin, and everything cultivating to a larger destiny. Well, he had a larger destiny, but it really had nothing to do with him being a bad ass assassin in modern times.

To be fair, you do get to play as Desmond and do some awesome stuff, which I really enjoyed and wanted a lot more of. You even get a random bad guy for him, who appears in the 6 missions you get to play as Desmond and you also get to kill him – so I guess at least there’s closure there? Although, still not sure who this villain was or why I should care about him. No, my favorite mission was the final when you break back into Absergo (the company run by the Templars, where you spend all of AC1, and Kristin Bell breaks you out of in AC2) to confront the bastard that kidnapped you. It’s a very satisfying situation, and I was hoping it was building towards something much larger.

The story then tries to explain itself out of the Superman origin story that was revealed at the end of the previous game, with some new meta person trying to get you to save the world from an impending comet by having you make a choice (a choice, mind you, the game makes for you). This random ethereal character tries to tell you what to do to save the world (and bring her back to life, somehow) while another random character (at least appearing in a previous game, for a short bit) trying to tell you something else. It was very confusing, and ultimately not very rewarding. But the kick in the pants for me was when Desmond makes the choice – to sacrifice himself to activate some machine to stop the meteor. And that’s it: Desmond’s dead. End of story.

There was no reason for him to be building up his awesome assassin skills, because in the end he didn’t actually have to use them for anything to save us all. He just had to be there. And now, with the main narrative character extinguished from the franchise, they are somehow making another game (AC4: Black Flag) but there’s nothing about who the new Animus character might be, or why we should care about them.

Also, how does this meteor fit into the conflict between the assassins and the templars? It just felt tacked on and sloppy. It’s kind of like the ending to LOST – it ends. It’s not a satisfying ending, and you don’t really understand why things happened, but hey – it’s over.

In the end, AC3 is a lot of fun to play but super frustrating from a character and story perspective. The ship-to-ship combat was a lot of fun, which makes me excited for the next game in the series, but beyond that there wasn’t a lot new in the series other than some disappointing plot points and some more unnecessary questions.

Worth a rental, but not necessary to own it.