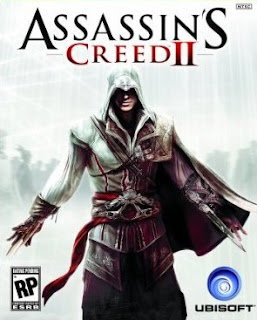 Video Game Review: Assassins Creed 2 (2009)
Platforms: PS3, Xbox 360
Developer: Ubisoft
Plot: Assassin’s Creed takes place in a near future where you play a character named Desmond Miles, who’s the long decedent in a long line of assassins. In the first game, you are taken by a corporation and put into a machine called The Animus, which can read history through your genes. In the first game we learned about the war between the assassins and the Templars, and their quest to find the missing pieces of Eden.

In Assassin’s Creed 2, you break out of the corporation and are whisked away by the assassins to a hidden location where there is another Animus. With it, they hope to train you to become an assassin in the modern day. You mostly play as your ancestor, Ezio, and as he learns how to be an assassin so do you. With Ezio, you discover a conspiracy throughout Italy of the Templars trying to find the missing pieces of Eden, and the power that these mystical objects holds.

It’s difficult to get into the plot of Assassin’s Creed because there’s a lot going on in the game – certainly more than the first game. A lot more missions and more variety to the quests, and some fantastic revelations that lead to another cliffhanger of an ending. But a much more satisfying one than from the previous game.

With better game mechanics and more variety, there’s no reason not to play this game. It’s fun, it’s full of stealth and action, and the two-handed hidden blades are absolutely AWESOME!

It may take a while to play through, especially if you’re trying to collect everything and get the hidden videos, so renting may be difficult (unless you have nothing else to do). But it’s certainly worth the price tag for owning.

Either way, be sure to check it out. The third one is rumored to finish off the story of Desmond, and I can’t wait to play him in some modern settings doing assassin missions!