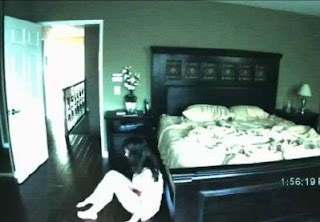 Movie Review: Paranormal Activity (2009)
Director: Oren Peli
Cast: Katie Featherston, Micah Sloat
Plot: Katie and Micah (who play themselves) are young lovers who have just moved into the same house together, and Katie reveals that she’s been haunted all of her life by paranormal activity. In an attempt to capture it on tape, Micah begins taping their lives and what happens while they sleep. The flick is basically a documentary-style flick of their lives during a two month period.

I had no idea what I was going to see when I was invited to check out this flick, but after having seen it and forming an opinion I’m noticing all of this hype around the flick. And I have to question why. Sure, the movie was shot for little-to-nothing over seven days, and it’s generated all kinds of buzz in the film community. But aside from a few scary moments, the movie is a storytelling nightmare! I respect it for what they were trying to do, but trust me when I say that your life will be no less rewarding without having seen this movie.

From a pure storytelling perspective, the movie suffers from terrible storytelling issues, pacing problems, and plot holes. And if you have motion sickness (like me), then you will get ill during this movie. It’s shot in the hand-held style reminiscent of The Blair Witch Project or Cloverfield – but has no direction or story to really speak of. The set up is solid and the movie certainly has some scary moments in it, but I can’t help but question a lot of the plot holes in a movie like this.

***SPOILERS***
For example, at one point in the movie she talks about how the “spirit” has always just watched her sleep and made bumps in the night, but once the ghost whisperer comes in he says that it’s a demon and Katie admits that she’s always thought this spirit wanted to do her harm. But if that were the case, then why would it watch you sleep? And why would it wait until this two-month period to gain enough power to do it. And in the end it doesn’t even end up doing harm to her….

Another example is when they say that the demon has a specific purpose for it’s hauntings, but this spirit has been haunting Katie for years. Long before she met her boyfriend, which is ultimately what we see the demon do damage to: Micah, the boyfriend. Why haunt the girlfriend for years when you’re just after the boyfriend? This logic may make sense in demon town, but not in my world….
***END SPOILERS***

The character motivations bothered me a lot in the flick as well. After something scary happens at night, we see the characters during the day saying that they want to leave the house and won’t sleep in that bed any more. Granted, the ghost whisperer tells them that moving won’t stop the hauntings – but then they keep saying that the demon is in the house, so wouldn’t sleeping at a hotel for a night at least give you a night of rest? – but then the next night or three nights later they’re back in that bedroom again. Maybe this is an editing flaw, where they filmed all of the scary stuff in the bedroom and then later decided where to fit it into the flick. Perhaps DVD special features would enlighten us – but I’m truly not really interested enough to know more.

When they talk about having a demonologist come in and exercise the demon, they don’t do it because Micah “is the man” and this is his house and he will protect her. But he’s not really doing a good job of that, and after 2 weeks pass they still haven’t called the demonologist. So the audience is supposed to feel bad for them when bad stuff happened? Because, I think they were asking for it at that point. And when they finally get around to it, it’s just far too late and the guy’s out of the country. There’s not another demonologist that you could call? You don’t have the internet or a phone book handy? It has to be that specific guy?

The characters make no bloody sense.

Honestly, I think the movie would’ve been better with the general set up, and then a bunch of shots of the scary stuff that happens at night. Make it a short movie, people will be freaked out, and there’s less of a chance that you’re going to 1) have poor character set up, plot holes, and contradicting motivations, and 2) that the audience is going to get ill from your sloppy camera work.

I won’t hold the camera work against the flick (heck, I liked Cloverfield), but I don’t want Hollywood to get confused with hand-held “shaky cams” as a style. This is not a style, this is sloppy. BattleStar Galactica uses a shaky cam as a style for setting tone and putting the audience in the situation. You use it in your motion picture and I just want to yell at you for making a home movie. This movie’s success works against my arguments about Hollywood being sapped for ideas and that they should try tapping no-names to make flicks. That budgets ruin movies. You can make a great movie for next-to-nothing (ie: Dr. Horrible’s Sing-Along Blog), but it requires a good story and people who’ve gone to film school and know what they’re doing. Unfortunately, youtube.com has made us all think that we’re talented enough to make movies.

In summary, the movie does not live up to the hype (not even when you haven’t heard any hype about it before seeing it, like me), and is a very sloppy presentation with some scattered moments that are frightening – which is what we came to see, and it does deliver in spurts. But honestly, you could skip it and probably be for the better for it.

More Photos from Mid-Ohio Comic ConUncategorized
Evangelion: 1.0Uncategorized
We use cookies to ensure that we give you the best experience on our website. If you continue to use this site we will assume that you are happy with it.Ok