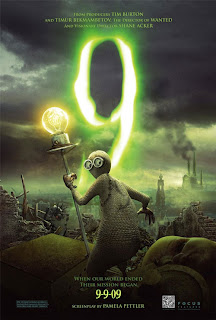 Movie Review: 9 (2009)
Director: Shane Acker
Plot: Waking up in a destroyed room with a dead old man in it, 9 wanders out into a post-apocalyptic world populated by 8 other rag-dolls characters and a handful of red-eyed monsters called The Beast. Taking a small green device from the room with him, 9 encounters 2 who is being chased by The Beast and is eventually kidnapped.

Now, 9 must gather the remaining rag-doll creatures and try to rescue 2, while understanding what the mystery of the green device is and how it all ties into what happened to the world.

From having first gleaned the trailer for this movie, I knew I wanted to see it. I watched the 9 minutes award-winning short film that it was based on and instantly went into media shut-out mode. I didn’t want anything about this movie spoiled for me. And it was not disappointing.

Well, the visuals weren’t disappointing. The story was flat and the movie was basically just an action movie with computer animated rag-dolls, but man was it ever a fun ride! I kept wanting more from it in terms of story, sure, but the visuals more than made up for the lack of plot in the flick.

Shane Acker did not disappoint on the direction, considering this is his first feature length movie. Tim Burton and Timur Bekmambetov have their signatures all over this movie, but instead of coming off clunky like a lot of creative collaborations (cough cough Indiana Jones 4 cough cough), this movie flows and synergizes with ease. The action is great, and while there’s hardly any characterization, the drama in the direction and the danger from the sequences is enough to make you sit on edge and hope for these characters. And with a PG-13 rating, you know that not everyone is going to walk away from this story….

…or if you didn’t, then I just spoiled that for you.

In summary, it’s a visually excellent movie and exciting action flick, but lacking in story and characterization. So it should appeal to most movie-goers. 😛

Movie Review: Sherlock Holmesmovie review
Movie Review: Avatarmovie review
We use cookies to ensure that we give you the best experience on our website. If you continue to use this site we will assume that you are happy with it.Ok