Movie Review: Evangelion 01 – You Are (Not) Alone 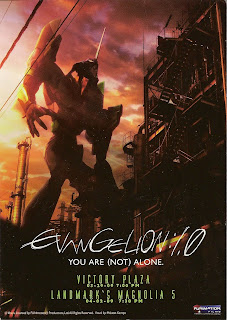 Movie Review: Evangelion 01 – You Are (Not) Alone
Director: Masayuki, Kazuya Tsurumaki
Official Website
Plot: In the not-too-distant future, 14 year-old Shinji Ikari has been summoned to Tokyo-3 by his estranged father who he has not seen for many years. Upon arriving, he finds the city under siege by a giant monster called an “Angel.” Picked up by a young woman who works for Shinji’s father’s organization called Nerv, she drives him to their underground base (a giant geo-front) and orders him to pilot a humanoid mechanized unit called Evangelion. When Shinji refuses, realizing that his father only summoned him here because he had a use for him, his father orders another 14 year-old pilot into the cockpit. However, this pilot, Rei, is severely injured from a previous experiment activating a previous Eva Unit, and can barely stand.

As the Angel attacks from above, the base begins to shake and Rei is thrust from her medical bed, blood leaking through her bandages. Shinji agrees to pilot the Eva, and is projected to the surface face to face with the monstrous Angel. However, not having any previous experience with the Evas before, he can’t even walk and the Angel attacks without mercy. Breaking his wrist and cracking his helmet armor, Eva Unit 01 is rendered broken and in the silence the human race watches as they are about to be wiped out from all existence by Third Impact.

Suddenly, Eva Unit 01 reactivates and goes berserk. It attacks the Angel with a ferocity and forces the Angel to blow itself up in an attempt to take Shinji with it. However, Shinji walks away with some minor physical wounds…but a whole lot of psychological trauma to deal with.

And this is only the first 20 minutes of the movie….

Those familiar with the popular (and highly controversial) anime series will see this as a rehash of the original footage. Let me put your fears to rest by saying that while there is a lot of footage from the original series and the beginning of the flick is a very sped up version of the first two episodes of the series (re-edited), the footage has been cleaned up to an amazing degree! There’s also new footage throughout, and while it’s mostly b-roll (stuff happening in the background or during voice overs), they do start to add more and more as the movie progresses. The battle with the 6th Angel is almost completely different, in fact. They’ve even added digital effects to many of the Eva and Angel sequences, and even some new conversations to help bring the audience up to speed.

For those of you not familiar with the series, you’re probably going to be completely lost watching this movie. But, like those of us who experienced the series, that’s part of the fun of it. Evangelion is brutal with it’s question asking, and not for forgiving with the giving of the answers. But, like modern TV shows like LOST, that’s part of the fun of it. For fans of the original series, they introduce some elements earlier on, making me think that later installments of this 4 movie series are going to be much much different. I also question if they’re going to follow more to the manga series (which has yet to finish, to my knowledge) which establishes more of the character relationships (specifically between Shinji and Rei), and builds Shinji more as a character instead of diminishing him like the series did. 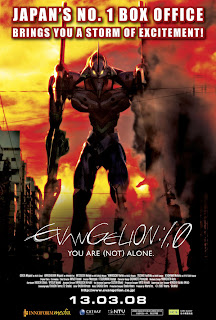 I won’t go into the spoilers from the series, but in the movie they certainly lay the groundwork for a lot of the questions that many fans are still asking themselves after the conclusion of the series and the two movies that “finished it all off.” It is not a requirement for you to have seen the series to watch this movie; as I started before the beginning of the flick is the first two episodes in fast forward, and it just builds from there at a steady pace. The theatrical version of the movie that I watched was dubbed, and while I hate dubbed anime, this was tolerable to me because 1) new voice recording, so the voices are slightly less obnoxious, and 2) I was just so damn excited to watch this movie it wasn’t even funny.

Walking away from the theater, I just want to pop in the series again and start from the very beginning.

Shinji’s journey is a difficult one, as he not only has to deal with being a 14 year-old kid with all of the social skills of a mute, but also because the fate of the human race literally rests on his shoulders. And he’s not your regular hero. Shinji is incredibly flawed, and that helps make his journey that much more interesting to watch. At the end of the movie, in fact, the desperation of his struggle is made all the more clear by a speech given to him by an adult about the world that they live in. The audience feels the weight of his burden as they watch the drama unfold, and his last-ditch effort to save humanity from the onslaught of Angels barreling down on Tokyo-3.

If you loved the series, you should totally watch this movie. If you have never heard of Evangelion but enjoy anime, then you HAVE to watch this movie. Then go out and get the series and thank Lilith that you didn’t have to wait for them to come out like the rest of us. If you don’t like anime and have never heard of Evangelion (but enjoy shows that ask you questions, like LOST) then you could probably get into this series.

From the opening sequence described above to the dramatic conclusion of the final battle against the 6th Angel, this movie is loaded with everything you love (or will love) about this series. And a closing song by Utada Hikaru (who did the theme song to Kingdom Hearts, for those of you unfamiliar with Japanese singers), and this movie is definitely going into my DVD collection. It may be a scam to get more money out of me years after the series has ended, but you know what – it worked, and I don’t mind at all. And the promise of things to come in the next installment (stay until after the credits for a teaser), and I’d say that a new generation of anime lovers is going to get hooked – and the previous generation will get hooked again.

I’ll leave you now with the closing credits song by Utada Hikaru, entitled “Beautiful World.” I have to dust off my DVD box set of Evangelion now and go nerd out….

Movie Review: Paper Heartmovie review
Movie Review: Sherlock Holmesmovie review
We use cookies to ensure that we give you the best experience on our website. If you continue to use this site we will assume that you are happy with it.Ok