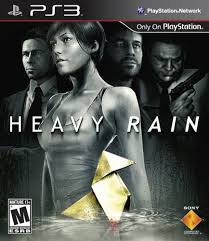 Video Game Review: Heavy Rain (2010)
Platform: PS3
Developer: Quantic Dream
Official Website: www.heavyrainps3.com
Plot: Ethan Mars is an architect with two sons, a pretty wife, and the perfect life. But when taking his family shopping at the mall a horrible accident happens: one of Ethan’s sons is hit by a car. Ethan had jumped out to try to save the boy, but wasn’t able to do so.

Two years later, Ethan is divorced, lives with his other kid, suffers from depression, and experiences blackouts. During one such blackout, Ethan’s other son disappears – kidnapped by the Origami Killer. This serial killer kidnaps children and their bodies are found drowned 6 days later. The clock is ticking, and the hunt is on to find the killer and save the boy!

Enter your cast of characters:
1) Ethan Mars has been contacted by the Origami Killer and has to undergo a series of trials to test his resolve and motivation to save his son. At the same time, he believes that he may be the Origami Killer.

2) Madison Paige is a photo journalist who suffers from insomnia (and terrible dreams when she does sleep). The only time she can really find peace is when she stays at a hotel – which is where she encounters Ethan, while he’s on the run.

3) Norman Jayden is an FBI agent with special sunglasses (and a glove) that allows him to instantly analyze and document crime scene evidence. However, there’s a special drug associated with it that cause hallucinations and pretty serious withdrawal symptoms.

4) Scott Shelby is a former police officer and current private investigator hired by the families of the victims of the Origami Killer. Because he was on the beat for so long, he knows a lot of good contacts and people on the force. 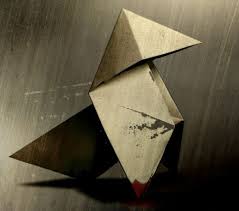 The gameplay is quite different from what you would find in a typical video game. The game is really more of an interactive movie where scenes play out, and you interact with the world by performing contextual actions – but your success (or failure) in performing the actions in time can determine the success of the action, and / or the scene that’s playing out.

For example, there’s a fight scene early in the game between Scott and a hooker’s John. The John is beating on her pretty badly, and if you decide to intervene (you can just walk away), you enter contextual combat. If you miss actions during the fight, Scott receives more noticeable damage (broken nose, bloody lip, etc). If he receives too much damage, the fight is over and Scott walks away limping…and you’ve potentially lost out on a story point of the game. If Scott kicks the snot out of the other guy, then another storyline pops up.

Some of the sequences can even result in a character’s death, but that doesn’t necessarily mean “Game Over.” It means that they’re just not in the rest of the game. Which, as the stories start to converge, would be interesting to see how they play out differently with or without certain characters. It also adds to the replay value of the game, since you get very invested in these characters and their journey – and if that journey could change due to the death of another character or a decision that drastically changes the outcome (like a character not tagging along with you), then that’s something worth checking out.

However, this kind of gameplay can be a little frustrating. My friends came over with a Move Controller (PS3’s version of the Wii controller), which you don’t have to play the game with. However, I had a lot of difficulty using the controller and doing the various movements and motions to successfully complete sections of the game. Eventually towards the end of the game when things pick up and the actions become more complex (and quicker), I had to switch to the controller. Suddenly I was doing much better. Not perfect, mind you, but at least I stopped killing the characters and having to restart chapters.

The story suffers from a few noticeable plot holes, which is disappointing. You’ve so engaged with these characters, their world, and their personal stories that anything that takes away from it sticks out like a sore thumb. Also the characters are very much like digital actors – but sometimes there’s some graphical errors or no facial animations that make the characters look like lifeless models. It’s rare, but when it happens you’ll notice and it’ll take you out of the gaming experience.

Overall the game is gorgeous, however. The graphics and music perfectly set the Hitchockian-esque thriller tone, and the sequences are down right tense – especially if you’re swinging that Move controller, fighting off an assailant…and losing! The voice acting is a low point for the game, unfortunately, as most of the voice actors have a noticeable accent that doesn’t quite fit. The developer is located in France, and many of the actors sound like they have a French accent. Plus, some of the lines sound less natural and more translated. You’ll notice a few dry bits of dialogue where you’ll think to yourself, “No one talks that way.” Again, these only stick out because the rest of the game is so perfect.

Madison and Scott have, by far, the best voice acting in the game. Which is sad, because I feel like I didn’t get to spend enough time with them. Especially Madison, who’s story kind of takes a back drop to Ethan’s in his search for his son. One of my endings implied that she could play a larger role in a sequel, but who knows if they’ll make another one. I hear there was downloadable content scheduled for this game, but they only released one chapter of it. Which, of course, is a Madison prequel chapter.

If you like a game with a great engaging story, unique gameplay elements (especially with the Move controller, which you may be better at using than I am), and some great replay value, then I highly recommend Heavy Rain.